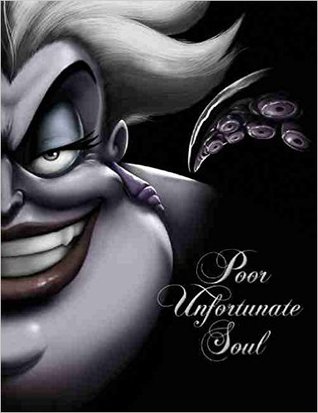 “Hate. Her magic was infused with it. And in that hate was a deep, penetrating sorrow. Those humans had taken from her the only person who had loved her, and she was going to make them suffer.”

The sea is a veritable breeding ground for tragedy, and this particular tragedy is a soft reimagining of The Little Mermaid from the villain, Ursula’s, point of view. Well, partly from Ursula’s point of view. Poor Unfortunate Soul tweaks the tale just enough, keeping most of the original story intact while dwelling on the behind-the-scenes schemes that led to its events.

I honestly had no idea that this was the third book in a series. I didn’t think they were connected other than being about Disney villains, but apparently there are some characters exclusive to the retellings that intertwine them all. At least, I think they’re exclusive – I’m not exactly a professional Disneyologist. I know several of the movies fairly well but there’s also several that I’m not familiar with at all, so I have no idea. My mistake there.
I don’t think you’ll have a problem getting the gist of what’s going on… but you might be disappointed that Ursula herself isn’t a bigger figure in the plot.

I know, right? The main focus is on a trio of witches and a Princess Tulip who apparently owes Ursula some sort of favour. They do give the boisterous siren some interesting backstory that opens with a visceral massacre of the humans who wronged her, her magic mutating them horrifically into soulless sirens. That’s a little… grimmer than the cartoon, I have to say.
Wonder if that’s a nod back to The Little Mermaid’s Andersen roots.

Anyway, I do like the witch sisters a lot, and their incorporation into the story was smoothly executed. Poor Unfortunate Soul also allows for a strange grey morality to seep into a story that had a much clearer distinction between good and evil in the original. Triton comes across as much more bigoted, and Ursula has moments that suggest maybe she’s just unlucky. As it turns out, you can be both unfortunate and evil, without those traits tying into each other.
I liked this take on the story – it’s an interesting short read and I’ve never seen another book use the term ‘Ophelian’, but there’s really no other fairytale more perfect for that description than The Little Mermaid.