Summary – Also known as Clock Tower: Ghost Head, Clock Tower II: The Struggle Within follows a student named Alyssa Hale, who grapples with her split personality, an evil, murderous man named Bates. After Bates kills three of her classmates, Alyssa tries to uncover the reason why Bates exists in the first place, leading her deeper into the dark history of her biological family, whom she never knew.

Overall Thoughts
I have a soft spot for this game, despite its many blatant, glaring flaws. It is objectively poorly planned-out, unfair and confounding with its puzzles, and many things about the central plot make no sense. All three fans of the Clock Tower series agree that it’s the weakest entry, though it does have a few positive things to offer.

The “Jekyll and Hyde” mechanic switching between the good Alyssa and the evil Bates is extremely creative. Bates will commit necessary crimes that Alyssa won’t to move the plot along, while Alyssa is better at problem solving. The soundtrack is a surprising electro-horror gem, with several fun and tense tracks – particularly the villain themes, like “Shiver Zombie”. The voice acting is actually phenomenal, which surprised me even more. Older horror games, well… they aren’t known for their stellar voice acting.

Sadly, these are the two main draws of Clock Tower II. The plot is interesting, but dotted with holes and useless characters. The graphics are passable. Horror elements often come across as silly because of the blocky textures, but this is true of most 90s horror games. The puzzles literally require you to be psychic, or ridiculously persistent with trial-and-error, and you will die often, mostly due to unforeseen, seemingly random events that no one in their right mind could have predicted would happen. An infamous example is the samurai suit, an innocuous piece of furniture that if you make Alyssa examine, will trap your game in an early bad ending. The game does not hint to this whatsoever. There are multiple instances like this. Having Bates kick the crap out of a possessed little girl is pretty funny, though.

My nostalgia with Clock Tower II goes way back, so I can’t help but like it, even though it is pretty terrible. The American version of the cover has always fascinated me, for some reason. There’s something that drew me into this image as a kid, and I always wondered what it was about. 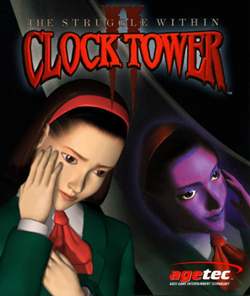 Clock Tower II does not know what it wants to be, and tried to mash up the subtle, occult tension of Clock Tower with the sci-fi horror of Resident Evil in the poorest, weirdest way it could have. I wouldn’t really recommend it unless you’re a collector.

Would It Make a Good Novel?
If the faults and holes in its plot were patched, then sure. The Clock Tower series as a whole has a lot of potential as a series of novels, especially as they remind me so much of the style of horror novels that was popular in the late 80s and early 90s, with female protagonists having to outwit a villain or stalker of some sort.

Thanks to the Clock Tower Wiki for the animation.
Follow my reviews on Goodreads.