Summary – Luigi, of Super Mario Bros. fame, receives a mysterious letter telling him that he’s won a mansion. In reality, the mansion is not the beautiful one depicted in the letter, but a haunted, dilapidated mansion in the remote woods. According to a scientist who lives nearby, the mansion appeared there on its own several days ago, and the ghosts who inhabit it have kidnapped Luigi’s brother, Mario.

Overall Thoughts
Luigi’s Mansion is a perfect example of horror that could appeal to anyone. It’s not gory, so it’s alright for the kids, but is entertaining and offers enough challenge for adults as well. This game is nearly twenty years old, believe it or not, but it’s aged astoundingly well. The unusual, creative blend of cartoonish characters and elaborate, almost Victorian settings is still pleasing to the eye. I’ve played Luigi’s Mansion about a hundred times and never had any technical problems or glitches, either.

The aesthetic and gameplay reminds me an awful lot of a softer, more colourful version of the first Resident Evil, which also takes place in a massive, sprawling mansion full of hidden rooms and traps. There are no weapons at your disposal, though. It’s not like they’d work on a ghost anyhow, so it’s just Luigi and his Ghostbusters-style vacuum cleaner.

The story is kind of basic, like a lot of Super Mario Bros. games, but the fun comes from exploration and defeating ghosts rather than plot. One thing I love in particular is the bosses. Every now and then Luigi will encounter the ghost of a human, who are much tougher and smarter than the Boos and smaller, blobby ghosts that show up around the mansion. These ghosts have to be tricked somehow into revealing their weak point so they can be captured. Usually, it’s something that has to do with their personality, which you’re left to figure out for yourself through clues in the ghost’s room, as well as notes and even on occasion, a conversation with the ghost. 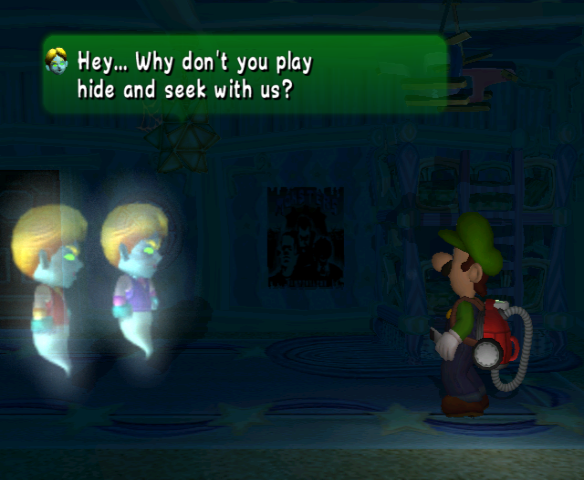 As a kid, I always loved Big Boo’s Haunt on Super Mario 64 and thought it was the creepiest thing, so of course it’s great to have a full-length game based on that design. I would also consider the sequel, Luigi’s Mansion: Dark Moon to be pretty great, but I don’t have enough experience with the sequel to make a separate post about it. Both are extremely fun games with a light survival horror feel to them.

Would It Make a Good Novel?
I don’t think so, actually. Some horror games would, but there’s not enough linear plot to work with here. I feel like Luigi’s Mansion would get pretty repetitive if you tried to translate it into a book. A graphic novel might be serviceable.