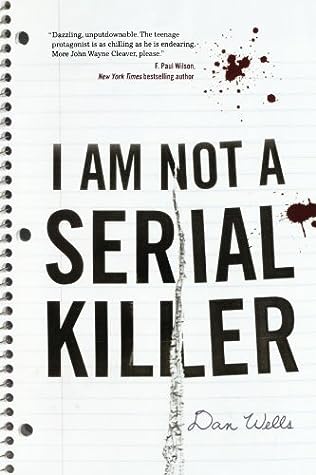 “Fear is about things you can’t control. The future or the dark, or someone trying to kill you. You don’t get scared of yourself because you always know what you’re going to do.”

Dan Wells’s debut is an unusual witches’ brew of dark humor, cerebral horror and bleak small-town life. The writing has jagged edges in its beginnings, but I have yet to find another series that I love with so little wavering. This is one of those rarities where I feel it was written specifically for me, with everything I knew and didn’t know I sought in a novel.

Me and this series are like connate flowers. However, John Cleaver really schemed and staked his way into my heart, and was cemented as an instant perma-favourite series to me with the second book, Mr. Monster. I Am Not a Serial Killer suffers from initial uneasiness as Wells gets on his feet with the series, and sudden doses of genre whiplash. The first novel pools its arachnoid feet into many genres, but gives off a flighty self-consciousness about taking the leap from a mystery with paranormal aspects into straight-out horror, which it definitely becomes by the second book. This was the only trait it had I didn’t care for, and I still don’t upon revisits, but the unsure tone actually fits when the main character’s chaos of self. John is never sure what he wants to be.

John “It Doesn’t Matter What Other People Think When You’re Right” Cleaver is a bitter, anxious, antisocial teen with hair-trigger violent tendencies that he struggles to keep from unraveling on those who don’t deserve his wrath, whether it be his mother or his friends. He is pulled between crushing loneliness and craving nothing more than being alone, something that reflected painfully when I first read it. His discussions with his therapist, Dr. Neblin, devolve from him not taking them seriously and trying to freak the doctor out, into panic and emotional decay from trying to hold up the façade of being “normal” and never showing anger, out of fear of what he’ll end up doing.

Wells builds in his anti-hero a depressive life with sympathy and flaws – a man who is so young and yet so miserable that his outlet is obsessing over murderers. Vaulted and locked somewhere in Cleaver’s existence is the remnants of a good heart he would have had if the people around him weren’t so keen on taking advantage of, ignoring and abusing him. Though Mrs. Cleaver is an interesting case, as she realizes the horrible person he might become and tries to make up for his childhood any way she can, and ends up being a far more admirable character than John.

As for the murder mystery aspect, it is bizarre and I love how it’s spliced into the drama. John Cleaver gets wrapped up in a series of deaths in his tight-knit town that are so monstrous, and the bodies left so splattered and barely recognizable that the police believe it has to be an animal killing them, but John senses it isn’t. The killer is human, but not quite, and turns out to be a force more ancient, more implacable. A species that is human at face value, but both beyond and below human nature at the same time.
In trying to become the killer-hunter, he becomes the killer-hunted when the perpetrator picks up on John trying to smoke him out of hiding through a series of threats he’s not sure he can follow up on when he’s forced to.

I Am Not a Serial Killer, while it’s distinctly my least favourite of the series and shaky in its beginnings, do not doubt that it’s still a wonderful debut novel. Wells’s writing is clever, and can work with melancholy and black comedy as well as tension. The atmosphere is glacial, and the dysfunction that’s mildewed between characters can turn as cold and cruel, or melt their bleak surroundings with surprising charm and sorrow.
Despite the fact that its protagonist can’t relate to anyone, ironically, it ended up being a poignant and relatable depiction of the barren abyss that is always trying to drown you when you have a mental illness, as well as just an engaging story all-around. I’d send a thousand years of recommendations, though if you’re mixed on the first book, please stick around through the later ones. You won’t regret it, I promise.