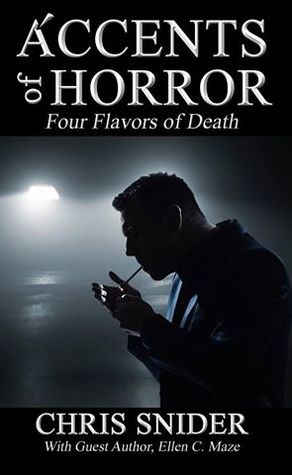 “Who else knows you better than yourself? You know all of your secrets.”

Accents of Horror is a four-act theatre of dark deeds, revenge and restless phantoms. It’s a load of creepy, classic urban-legend fueled fun. I like that it can be cut into different varieties of horror, from a ghost story to occult horror to a very real horror that comes completely from human beings, nothing paranormal involved.

These are all very brief stories, so it’s difficult to go in-depth about them without outright spoiling the plots, but here is a quick rundown of my thoughts on each. I recommend this collection if you’re looking for something short, sweet and with a conservative but lasting dose of disturbing imagery.

This I believe was my favourite, along with “The Comeback”. “A Stranger in the Rain” is a story of sin and retribution in the classic way. Twisty, sinister and laced with devilish hallucinations.

A rather sweet take on the vanishing hitchhiker myth. It isn’t incredibly scary, but is creative in its retelling and a pleasant read otherwise. It is more heart-warming than anything.

This was the darkest story atmospherically, but somehow didn’t stand out to me as strongly as the others.

The twist in this short is like a gut-punch. I loved everything about this story, which follows a has-been actor and his rivalry with an up-and-coming actor that he feels has stolen his role in the spotlight. The bitterness of losing fame and jealousy react to a terrible and violent end.

One thought on “Book Review – Accents of Horror by Chris Snider”