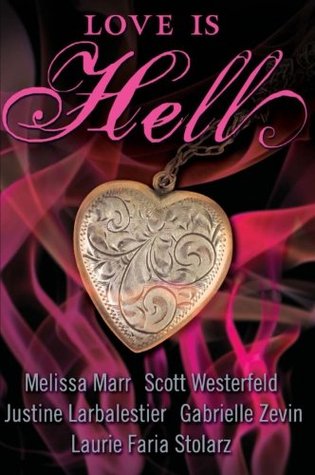 (Un)happy Valentine’s Day. Here I present the fitting title Love is Hell, a romance anthology that, despite the name, is not that infernal. Like the Valentine’s holiday, it’s neat but also easily forgettable.
Love is Hell dips its toes into the border of dark fantasy with the caution of someone who would be humiliated to be seen playing around in such territory. This collection tries on a patchwork flesh of genres, unsure about which it’s supposed to be. However, it does at least succeed at coming across as a romance book. If ho-hum about its paranormal side, I believe that paranormal romance fans are who it would probably appeal to most. I’m not grand on paranormal – not a species of book I have a positive history with. So you might want to break out your salt-shaker for my opinions here.

Love is Hell was a slog for me. The authors are all talented people, no doubt, but there is more aggravation than captivation about this, as well as zero consistency. It’s not fair to expect an anthology to be consistent as far as the writers’ styles, but there’s nothing threading them together. The shorts are at odds with each other rather than bleeding into a theme. One of which there isn’t, not that I could tell. Does this book even make the statement that love is, in fact, equal to eternal torment? Let’s break that down, shall we?

“Sleeping With the Spirit” by Laurie Faria Stolarz – ★★★
Hell-O-Meter: Low

The tragedy of a human who falls in love with a handsome ghost that was murdered in her house. Of course, this only happens after he drove her into severe insomnia because she was initially horrified by him. I found it creepier not that the boy was a phantom but that he was constantly watching her in her room. The apex of romance, that.
This story is alright, though. The plot is a little clichéd but the writing and pacing make for decent intrigue, and the ending is sweet.

I liked this one and its thought-provoking concept quite a bit, with genetically perfect humans simulating diseases of past humans to gain a perspective on what life used to be like. “Stupid Perfect World” is lighter in tone but it’s my second-favourite entry. This story goes to creative lengths and refrains from preaching about technology – the focus is only on two individuals who share a rare, inimitable experience amidst a world that will never know what that’s like.

A woman is trapped, mentally and physically, within a religious cult who demonizes her fiancé because they believe he is fair folk. I didn’t really like this one. Maybe that’s uncharacteristic, as cults, forest fae and curses are the foundation bricks of my alley. “Thinner Than Water” just felt like watching someone being tortured for no reason.
I feel like this story could easily be someone’s favourite – the concept is unique and dark, but it’s just not to my taste. I didn’t like the half-hearted romance and the ordeal seemed unnecessarily cruel for such weak chemistry.
Love actually is kind of hellish this go around, I’ll give it that.

We all know her. Exotic eyes, unparalleled beauty, a name that is nigh unpronouncable by the human tongue. But despite her beauty, she is so modest that she cannot stop repeating how modest she is. That’s right – she’s Mary Sue and she’s here to slaughter your fantasy novel.
I adored “Fan Fictions”, which is a psychological drama undoing the much-loathed ideal that shows up in fantasy books. The “love interest” is more the Mary Sue in this case, but the protagonist is a brilliant, dark-as-death parody of Bella Swan-esque characters that have become Mary Sues in their own right.

“Love Struck” is a take on the Scottish selkie myth. It’s original and you don’t see that myth explored too often even in fantasy, but this story didn’t stand out to me much. It’s, eh.

Love is Hell, overall felt like some good ideas burnt into a soupy purgatory. Not quite Hell. It’s an okay read, especially “Fan Fictions” and “Stupid Perfect World”. None of the others left a particularly impressive tattoo in my memory. The mood and stories are sort of random save for they all have a romance plot, but if that’s what you’re there for, Love is worth a try.