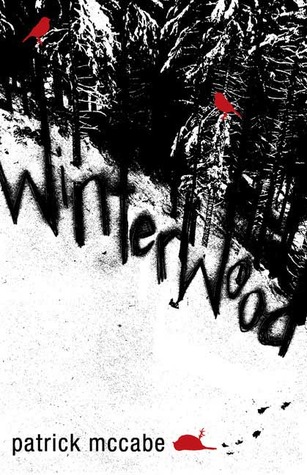 “Here we both lie in the shade of the trees, my partner forever just him and me. How long will we lie here O Lord who can tell? Till the winter snow whitens the high hills of Hell.”

What a man fears with obsession, he eventually becomes. Winterwood is a quiet novel, like the underside of a tomb is quiet. McCabe takes the already unsettling notions of lost childhood trauma, hidden animosity between relatives, and brings the raw, writhing form of these out into the light where it was not meant to be seen. It is uncomfortable and surreal as a true psychological horror needs to be.

Redmond Hatch is a journalist who is driven to madness after an old family acquaintance, who turns out to be a depraved murderer, plants the seed of doubt in his mind that one day Redmond will become the lonely, grotesque sort of man that he ended up in the end.
Winterwood spans his private thoughts over about a decade, from his return to his rural hometown to raising his daughter to living in sordid depression after his wife divorces him. Redmond grows gradually more and more obsessed with this murderer he knew in his childhood and never once suspected, much like nobody else did. He grows obsessed with getting back into his daughter’s good graces, while believing the ghost of a killer’s stalking him.

Winterwood is told through lies that the narrator, Redmond, himself believes, or maybe he doesn’t. Maybe he is spinning a tale, but more likely he’s doing horrific things he isn’t aware of in the shadow of a man who disgusted him, but Redmond was the only one ever who knew him intimately. It is horrible but impossible to stop reading as it unfolds. Patrick McCabe’s books have a tendency to revolve around the waning sanity of someone marginalized or cast out of society, but in this case Redmond was very much in tune with other people at first. It’s that much more disturbing to see him start to unravel because he seems very stable for awhile, until confronted with memories of his childhood.

The prose in this novella, while not as rough as The Butcher Boy before it, relies a lot on strong Irish dialects, which I’ve noticed has turned some people off of it. You have to go into it knowing that, and McCabe’s punctuation is chaotic and inconsistent as well in all of his books that I’ve read – it can go from standard punctuation to none whatsoever depending on what state the character telling the story is in. It gives an authenticity to the voice, as if it’s their journal but can be confusing, just fair warning on that.

Despite that, as far as modern gothic novels, this is my favourite thus far and the creepiest I’ve come across. Describing it is hard without fracturing into stammers, but I can best liken the experience to the feeling you would get waking up to find yourself surgically conjoined to someone who has died but still stares at you with moving eyes.