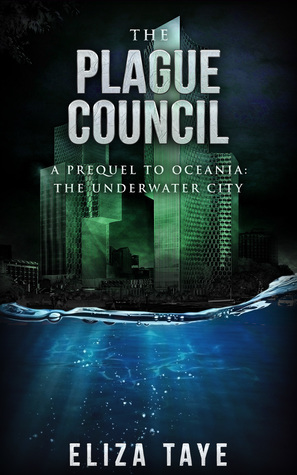 It is a fact that I met The Plague Council by the sea, and read it there with its heart beating in waves at my feet. Hearing the ebb and flow of the ocean firsthand is an injection of new life when the blood in your mind feels stagnant and sad. The best circumstance to read a new book.

The Plague Council begins what I believe will be a really original science fiction series, taking place in a post-apocalyptic society that is dying but has the chance to be renewed if they can relocate to the bottom of the sea where disease cannot reach what’s left of them. A different ebb and flow, of life versus death. I like that it’s a reverse reinvention of the Atlantis myth. Rather than rediscovering an older culture’s “Atlantis”, they build their own.

I’m drawn to the water as much as the wind. People share a lot in common with the ocean, beyond even the cautious phrase of science and reason, and more complex than the simple fearfulness of superstition.
We are made of its body, we need it. Importantly it also has the will to be merciful or murderous as it chooses. The ocean is a creator and yet also destructive towards its creations. Sounds much like a human personality, doesn’t it?

This story asks some interesting and sometimes uncomfortable questions about what people should choose in the case of a widespread disaster – in the wake of complete trauma, could we go back to the sea? Would it welcome us after what we’ve done to it, or destroy us? Who would be saved and who would be forgotten, and why? Is this more power than we should ever be given that some should decide these things while others have no say?

The writing is descriptive and clear, but I do wish some of the characters besides Jessica were more fleshed out. This prequel is a promising start though. I’m eager to start the main series and see where it takes me.

2 thoughts on “Book Review – The Plague Council by Eliza Taye”