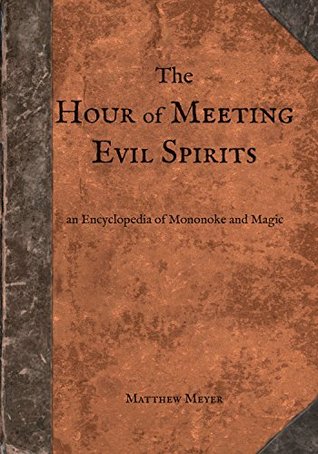 Don’t ever practice demonic rituals without the guidance of an expert, kids.

The Hour of Meeting Evil Spirits is a sequel to Meyer’s yokai encyclopedia, this time delving into more occult aspects of Japanese mythology, such as curse and blessing practices, ideas of hell and heaven, and particularly infamous phantoms. Unlike your standard run-of-the-mill yokai, have the misfortune to come across one of these and you’re pretty much screwed.

There is an entire section on my homeland… I mean, a horrific place I’d never heard of and certainly don’t own a summer home there – Jigoku.
You could call Jigoku the Japanese equivalent to Hell in western religion, and is heavily intertwined with Buddhist philosophies. Descriptions of Jigoku make Dante’s Inferno look like a jolly walk through the park. Like Dante’s Hell or perhaps a foul-tasting but elaborate cake, Jigoku is made up of increasingly unpalatable layers of suffering.

“Mugen Jigoku, the hell of uninterrupted suffering, is the eighth and deepest circle of hell. […] The souls down here are so hungry and thirsty that they tear apart their own bodies and drink their own blood in a useless attempt to ease their suffering. Words literally cannot describe how awful this hell is; if Mugen Jigoku were ever accurately described, both the reader and the writer would die from the sheer horror of it.”

Ushi no toki mairi is a pretty notorious ritual this book talks about in-depth. I knew about it before, but did NOT know how bad the implications of it were. It shows up in a lot of classical Japanese art as well as manga and anime – if you’ve read anything by Junji Ito, you’ll probably know his character Souichi, whose signature is the ringlet of candles and nails associated with the practice. I found the similarity to voodoo fascinating.

That’s just touching on a few strong points, really the whole thing is full of interesting curiosities and superstitions.
Unlike Meyer’s previous yokai book, probably not as many people are aware of these parts of Japanese myth and ancient religion. This is also an especially cool and professional book, and it’s not once boring. Meyer also created paintings for each entry, all of which are great.
Sadly, as I mentioned in my review of The Night Parade, these can be hard to come by in physical print. You can still get eBooks readily, but this is the sort of book the coffee-table format is made for.