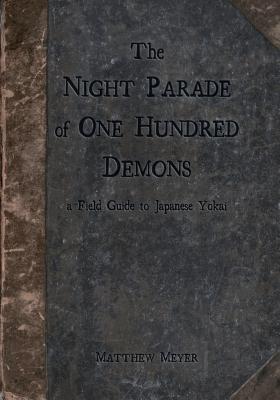 Remember, phantoms are more scared of you than you are of them. Well, except in the many cases in which they aren’t. In which, tough luck!
Yokai are “ghosts” from Japanese mythology. I say “ghosts” in “quotes” because the meaning of yokai can be rather vague, and can extend to monsters, human ghosts, animal spirits, cryptids, demons and more tangible curses alike. They range from adorable and welcome in the household, to elusive and oddball, to violent and vindictive should you dare to seek them at the crossroads.

There is a yokai for every niche, anxiety and injustice you can blurt out. Pick out a nightmare you remember some imagery from, and there’ll be a yokai to match it.
My personal favourite is the bloodthirsty tree, Jubokko. I also enjoy the company of Jikininki, but find craving fresh humans to eat for all eternity to be a melancholy way to exist. Every time I talk to one, I’m grateful that cannibalism is a choice rather than a necessity for most people.

I’m also rather fond of the Nuppeppo just because its history is weird, to say the least. The Nuppeppo is essentially a great stinking wad of unused human-like meat and there is more than one recorded case in history of people coming into contact with it. Supposedly if you can catch it and cook it, it and will make you live forever.
If you could stomach the rotting, slithery mess… Ugh, nevermind. No thanks.

I have to say, a comprehensive book on yokai was much needed and The Night Parade is exceptionally awesome. As rich as the source material is, there is a surprising barrenness of solid Japanese mythology books in English.
The effort and talent that went into this guide is phenomenal. It’s organized, heavily researched and the author’s paintings are crisp and beautiful. Unleaded creative fuel.
I’ll always favour the visuals in books like this, but Meyer’s artwork really is cool. I didn’t even realize they were digital pieces until it was mentioned.
Some of the more obscure yokai you can’t actually find creative interpretations of anywhere, even in classical paintings.

It’s depressing that The Night Parade is hard to find in print. A vibrant, colourful collection such as this ought to be in physical print. It’s still on Kindle though, so not all is lost.