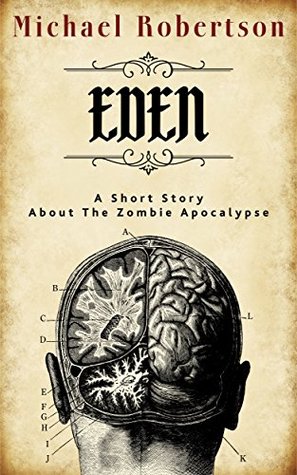 “They’ve more than coped. They’ve thrived. Who’d have thought that the next evolutionary step for humankind would be to take away our ability to think? Remove our ego, and we stop destroying one another.”

Eden is a pair of twin stories, “Eden” and “Pandora”. In both, the dead live again but incomplete, trapped in a sleepless state of blind hunger by a virus or else a curse. Eden stands out as different because here, existence as a zombie is seen for how undeniably tragic it is. Thought-provoking and bleak, it might be beautiful poetry if it didn’t involve eating the human you used to be.
I’m not normally a huge fan of zombie books but I enjoy them if they are unusual or fresh, and this short novella does a good job of that for being a read of only an hour or so.

“Eden” is the stronger short, being about a father and son living, or shall we say surviving in a government containment center, left to watch the remnants of their desolate world die through screens alone. They note that it seems disturbingly peaceful now compared to how it used to be, which carries a lot of terrible implications for them now that they seem to be worse off than the undead. This is definitely the better of the two stories, and you grow surprisingly close to the son, Mark, and his predicament as he begins to see less and less light from his future.

“Pandora” is confusing because it seems to start in the middle of the event, without really explaining what led to it. There is an elusive box that unleashes the undead, but why did the characters even have this, and how in the world did they get ahold of it? “Pandora” is good, but could’ve branched out. It feels like something was lost in the midst and it leaves so many questions in its trail.