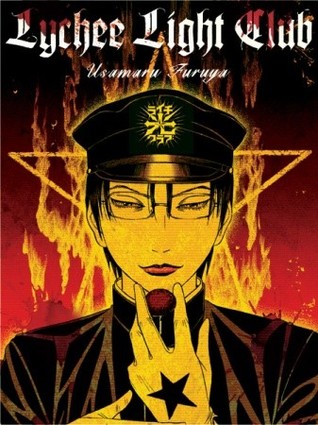 What makes a human? Emotion? Fear? Intellect? Or is it just flesh?
I always hesitate before labeling a book “insane”. “Insane” doesn’t tell you anything. But… a guy gets impaled through the stomach by a toilet in this book. I’m afraid the word I need for this doesn’t exist, so I’ll have to settle for “insane”. “Pathologically brilliant” may serve as a better substitute, if you so prefer.
Somewhere in the dimension beyond where anything is offensive was this story’s birthplace. It’s a great statement about dogmatism, but the blackness of its humor has pinned open more than a few eyelids, so be prepared!

Lychee Light Club is a mad dystopian drama about a high school chess club that devolves into a death cult à la Lord of the Flies. They become obsessed with Nazi occultism and eternal youth, and don’t care who they have to blind, disembowel or execute to get it. Mostly adults and bullies they don’t like at first, then each other. No one’s really off the table.

I imagine this is what LotF might’ve been if it had had a bleak industrial setting and Roger had usurped the group instead of Jack. Club captains Zera and Jaibo are much like Roger and Jack, with their callous cruelty multiplied by ten. Kamiya and the original Light Club’s members are almost voices of reason. Almost. But they too have shed their fair share of blood.

The club’s ultimate downfall is a robot they create together to bring them this coveted eternal youth – named Lychee for the fruit used to fuel him. Lychee is made out of human bits and scrap metal, but the human in him is what becomes their undoing.
A little bit of involuntary nausea and perhaps splurging is inevitable with some of this manga’s imagery, but it’s by Furuya, so it’ll be the prettiest nausea you’ll ever get.

The Laughing Vampire… oh, I could go in circles for months about how much I enjoyed that book. It’s kind of disappointing that many readers won’t get that Light Club is an homage to it, but it’s hilarious for those who do.
This comic’s not for everyone. The foul content is top-capacity, and you probably wouldn’t be able to let your poor old obaasan borrow it, but if you’re tired of reading stable and regular manga, the Light Club’s always waiting for you.