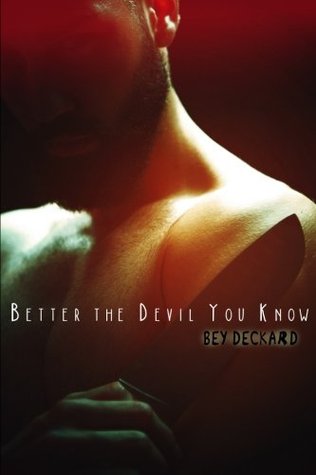 Wherever the soul lies, I feel mine has been vivisected to shrivel in shame just for being familiar with this novel. I don’t even feel good about writing a review, and I write gruesome stuff for a living.
It’s pretty controversial, being banned from a handful of book outlets, notably Smashwords. Quite ironic, considering Smashwords is known for not rejecting much in any genre.

Better the Devil You Know is a straight-up Alighierian horror dressed up as an erotic romance. A knife-wielding demon in the skin of an unusually flirtatious angel, if you will.
I admire Deckard’s bravery in publishing this book, but am tortured in giving it a good rating. To say it is “disturbed” is an understatement. Calculated and extreme violence abounds.
The reason I think I liked it in spite of its gut-churning details, is because I find novels on the facets of human cruelty to be poignant and more potent than other novels.
A heartwarming book will be kind and remembered fondly now and then, but a heart-crushing book will survive time and not allow you to forget it. This one definitely won’t.

Bey Deckard is a talented writer, especially with characterization. This makes the extreme violence that much more unpleasant because the author builds a sense of sympathy for even the characters you know will die.
Well, except for the protagonist. There is no sympathy for him. I hesitate to call Byron Danielsen a “pro“tagonist, as ending up in an enclosed space with this man is a fate worse than death, but that’s what he is.

Byron is the source of the book’s controversy and discomfort, a serial killer and torturer with no emotional scale in particular. Karma won’t even touch the man with such a hostile, almost alien set of mannerisms and even when he dies and goes to Hell, the devil himself is like:
“Is this even a human being?”

The religious themes when Byron goes to Hell bothered me some. It’s very Inferno-esque, but it’s not that the themes are offensive (though they easily could be, fair warning) but that they’re not handled that well. I think in trying to steer more towards realistic fiction than paranormal, a lot of the underworld-building was handwaved away. Hell is basically like a bunch of office buildings that are perpetually on fire or otherwise buried in stone.

Better the Devil You Know is outrageous and revolting, but also a little tragic. It’s egregiously mislabeled, so much that it seems trolling – I found that it was categorized under “romance” – and is definitely more cut out for someone who like disturbing thrillers. Sure, this is emotionally strong and painful, but it is NOT a love story. Unless you consider demons posing as a man’s victims to torment him romantic.

If Better the Devil looks like something that’s up your alley, go for it. It is in all fairness a well-written and original book, but don’t say I never warned you. Graphic content abounds and I’ll note a trigger warning for torture and dark sexuality.