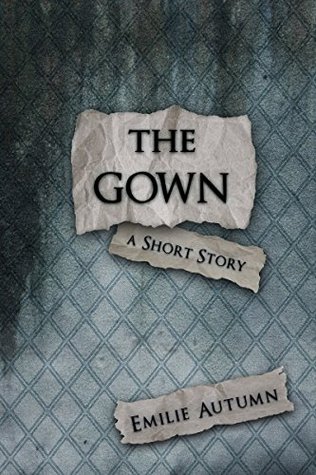 The tile of the ward is colder than death’s heart, and yet it always tries to coax us back into its arms with a lie about its nature.

A young woman is admitted to a hospital several times over her life, at first for an innocuous general visit as a teen then for her deteriorating mental and physical health as an adult. Each time one same old gown turns up, stained with the blood of a past embarrassment that seems to haunt her, an omen which only seems to serve to add insult to her injuries.

“The gown had become a staple of her wardrobe, a reviled relative that would not die and kept visiting even though he was not wanted and he knew it very well.”

All mental illness stories, true or fiction, tend to be horror stories. Horror plants its flora in the guts of fear and tragedy, and mental illness breeds both in abundance.

A criticism of The Gown is that the protagonist is overreacting to an unlikely bloodstain, and that it isn’t a “realistic” depiction of mental illness.
You have to consider what the stain means in the context of paranoia, though. To a person admitted again and again to a hospital in a fragile state of mind, how could it seem like anything other than fate taunting “No matter where you run, you’ll always end up here.”
Being mocked and constrained by even the little things in your environment is any mental illness in a nutshell, which is part of why it’s so hard to fight them. There is not really any freedom that’s meant for your hands, even if you had everything in the world at your disposal. It will just turn against you, eventually.

So, I find this story quite realistic, save for perhaps the over-the-top ending. I didn’t think the study questions were really… necessary, but I do think the subject of this short is one more people should consider from other perspectives and ask themselves about in-depth. It can be the tiniest, most inanimate, most innocent things that trigger the worst catastrophes in us.