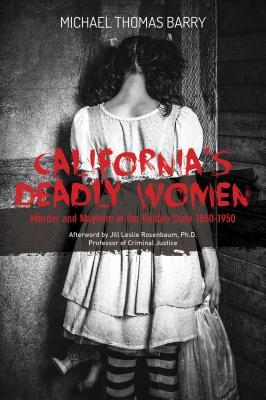 Darkly fascinating and tragic, California’s Deadly Women unearths the crimes of a hundred years. The blood, shame and sorrow of these womens’ acts of murder are shown in a versatile light – whether it’s forgiving or damning is up to the individual circumstance. Whether desperation or malice, accident or intent, the crime was done, nonetheless.

The cases in this book range from 1850 to the 1950’s, and speak volumes about the issues of their respective era, notably women’s rights. Some were nothing more than a straightforward act of evil, but many of the stories are ones of panic and desperation which led to the worst. These showcased with clarity how paradoxical, stigmatizing and merciless society could be to women, even if the law was lenient.
Consider that they were almost always victims themselves, and if it weren’t for that same system, they wouldn’t have been driven to desperate ends in the first place. The cases where it wasn’t intentional, but a necessity of self-defense, are a deeply disturbing portrait of the time. No one should get away with murder, but no one should be forced onto a path where something as vile as killing seems like the only means of escape, either.

The book delves heavily into different facets of women murderers and how they became that way, as well as the flippant inequalities of the American justice system towards criminals based on their gender, race, appearance and personal history – still unfortunately very prevalent today, as evidenced by the uncanny parallels between these women’s circumstances and recent stories.

The writing style is accessible and clever, and many interesting photographs of good quality are included – such as portraits and gravestones of the accused, as well as houses, locations and how these places look today. Ultimately a thought-provoking and well-constructed piece of nonfiction which gives a face and story to tragedies and cruelties buried by time.

[I received a copy of this book through NetGalley in exchange for an honest review.]