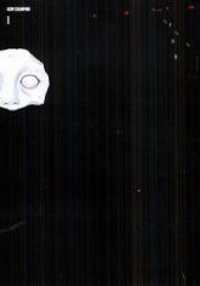 …What business does a book have being this creepy, anyway? Seriously!
Seeds of Anxiety is a series littered with ominous trans-dimensional shadows and ghosts that watch you through the paper they have seeped into. There are subtly disturbing creatures coming out of its (metaphorical) ears.
Maybe they are sinister. Maybe they are just curious. Or worse, maybe they have grown attached. Letting you know their intentions is not an otherworlder’s strong point. Either way, what’s left is a creeping paranoia that knows no logic nor reasoning. Don’t look over your shoulder…

The series uses little-to-no gore, and the art style is even kind of cute. It doesn’t seem like it should be scary at all, but it relies on the sinking, increasing distress of feeling watched by something you can’t see, nor can you understand what it wants.
The stories in this are very short, most are 8 or fewer pages. They feature ordinary people going about their business, usually alone. Some are walking home from school, some are doing office work, just a boring day… but then something from out of the blue arrives… Some unknown creature from the abyss wants to make a friend, some shadow in the character’s peripheral vision comes out into the open… Big, soulless black eyes start to watch from out of the corner of the room…

The second and third books suffer a bit from the novelty that makes them interesting – stories that leave you to your own conclusions, with at least one ghoulish surprise squeezed in somewhere – kind of wears. Still awesome, but don’t quite live up to the first one.
Highlights are the one about the woman washing her hair, when she catches a pair of eyes watching her from the water, and the Playful Man who wears a bag over his head, which doesn’t seem the shape of a normal human head.
The second book also has the infamous maternity ward “baby”, with equine teeth and a blood-soaked mask…

Would recommend for those with an interest in creepy urban legends, who like horror but don’t like gore or violence, and well, anyone who needs a refill of paranoia-nightmare fuel in their life. Though sadly, as of this review there is no official English printing of this series. There are snippets and artwork from it online if you’re curious however, and the Japanese edition is pretty easy to find. The series doesn’t have a lot of dialogue so would be good for someone practicing Japanese, if you like traumatic nightmares as a part of your education.